This is not a terribly relevant post; just making sure I have posted so as to not get this journal deleted. I believe people have to reply, so say something to me.

Pick and Stick
If you could only eat one kind of cuisine—Mexican, Thai, French, Italian, Indian, Chinese, etc.—for the rest of your life, which one would you choose?
Reply 256

Well. I guess if it were cheaper and easier to get hold of- or I instinctively knew how to prepare it- I would live on sushi.

Barring that I'd want carta blanche at one of those Brasilian places where they shiskabob absolutely everything. 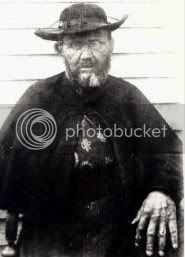 In the 19th century, Belgian priest Damien de Veuster risked his life helping leprosy patients in Hawaii, until he eventually caught the disease and died. The Vatican has credited the missionary, shown here in 1889, with performing two miracles -- one of which happened a century after he died. The church announced Saturday that it would declare him a saint in October.

Born Joseph de Veuster in 1840, he took the name Damien and went to Hawaii in 1864 to join other missionaries of the Congregation of the Sacred Hearts of Jesus and Mary. Nine years later, he began ministering to leprosy patients on the remote Kalaupapa peninsula of Molokai island, where some 8,000 people had been banished amid an epidemic in Hawaii in the 1850s.
The priest eventually contracted the disease, also known as Hansen's disease, and died in 1889 at age 49.
"He went there (to Hawaii) knowing that he could never return," The Rev. Alfred Bell, who spearheaded Damien's canonization cause, told Vatican Radio. "He suffered a lot, but he stayed."
De Veuster was beatified — a step toward sainthood — in 1995 by Pope John Paul II.

Hill of Sacrifice, these are my final lines of verse before I go beyond. This is the moment. Yes.

I have laid aside my inked veins, the spine of the book is, again, a sweetened arc ruffled slightly in these tornadoed winds. I will not lift it again. This computer too, soon, I will not need.

Under this ground who knows how many lie, perhaps dreaming, perhaps tormented by Her judgement? Perhaps capable of nothing at all, as I am, as I make my way to the clearing to make my last stand.

When I become a lifeless shred I too shall join these cradled dead, as it was meant to be.

I am glad to have seen my sister, to know I came from somewhere before this place. So beautiful,to share my last moment tasting the skin on her forehead, to kiss her goodbye before the turning away, locking all hope behind us.

Glad to know I was worth something to someone, more than just damaged goods begging for a bone, great designs in an empty skull, one more person, one more stone, just another tooth in G-d's great ugly grin.

Our sounds fade and are so easily replaced. We'll clutch at the ground, we'll send prayers into space that maybe just, maybe just we'll get to shine once more, in another time, in another place; in a world tailored to our tastes.

Oh Curt, oh Ulfie. Be well. Die painlessly, gracefully, beautifully. I will miss your caresses, if there's anything left of me to miss anything.

Ulf went to look for Curt and now I don't know where either of them are. Has anybody seen them? Can anybody go to Alchemilla and help me look for them? Please! I can't stand being alone here and I won't have the courage to do anything like this stand the thought they might be lying around hurt somewhere. Please! Somebody has to help! Please?

Has anyone noticed recently that there's no service at Happy Burger right now???

Trash, from what I know, is up here at Brookhaven.

No, not to get her breasts enlarged, they seem to be adequate enough if you're into that kind of thing.

Anyway. I just had an owl fly by the hospital. It had an odd newspaper article attached to it with a moving picture of our local frycook, Severus Snape. Apparently some woman named Umbridge has him in custody and Luna wants those interested in helping to come to the burger stand in spite of its utter lack of food so they can try to spring Snape from jail, or something along those lines.

It is a necessary exercise, to take the bare-bones of an ancient and fading belief, and attempt to reconstruct a personal belief one can live with.

I believe that "Paradise" is the unmitigated communion and fellowship with God. Paradise is separate, holy, and pure.

The Heavens, (or Heaven) are the domain of the Divine. People can't go there. We're people. There is a clear and uncrossable divide between the Divine and the mundane, the physical and the profane. God rules from Heaven, angels go hither and thither, and Man never sets foot there. It isn't possible. It is a metaphysical impossibility.

Sheol is the place of Death. When we die, we die and rest in the ground as the beasts, as spoken by King David of the Judeo-Christian faith: "You are gods, sons of the Most High, all of you; nevertheless, like men you shall die, and fall like any prince."

I believe that this polluted place is our place of waiting, torment and trial. That there are those by example who have led the way to Paradise; St.Jennifer, St. Nicholas, St.Stephen, Buddha, Elijah and so forth. I do not believe in endings, for endings are a particularly human concept. Like others before me, I hold to the concept of limited reincarnation, wherein those who fail to achieve proper holiness and purity, and are so denied entry into Paradise, return to earthly existence.

In short, Hell isn't so much a place where you go. Hell is where we are.

I also think that God really shouldn't have a place here. Why should She lower Herself at all to come to this place of suffering and failure? It's human arrogance to assume She wants us to wake Her, invoke Her, call Her here.

In short? If She's forced to come someplace so beneath Her, it's a given She's gonna be pissed.

Needless to say, my way of thinking never went over well with The Order. That's why it is ironic I am the only one left. I'm not sure what I can do, how I can help anyone. If none of this had ever happened, if Claudia hadn't tried to force God's hand, if Walter hadn't gone on his purging spree, I'd have probably been killed anyway. For heresy.

For God's sake, people, you must know this. I haven't hid anything from you insofar as that is concerned.

So. Now that the end of everything is so near, why on earth would you think She's going to start listening to me now?

Alright. So far I have very little more than you have in your copy, but I found this one passage-


When darkness falls and the Mother awakens, the sisters who were lost might still be found.

Am I the only person in town right now who isn't unhappy?

The town hasn't tried to kill me in at least a week. This calls for a celebration.

or at the very least,( Collapse )
Collapse